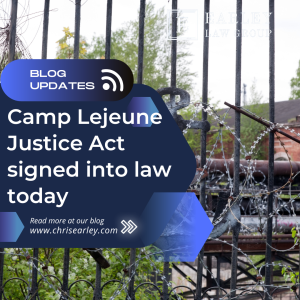 Marine Corps Base Camp Lejeune is a United States military training facility in Jacksonville, North Carolina. The water supply at Camp Lejeune Marine Corps Base was polluted with toxic chemicals from 1953 through 1987.  More than  1 million individuals were exposed to these toxins, which caused many residents to get cancer and often die prematurely.

To correct their faults, the Honoring Our PACT Act was introduced in June 2021 by Representative Mark Takano (D-CA), guided by the input of toxic-exposed veterans, lawmakers from both sides, the Department of Veterans Affairs, and others.  The bill was signed into law today; August 10, 2022.

According to the bill (H.R. 3967), the Honoring Our PACT Act will provide eligibility for Department of Veterans Affairs (V.A.) medical care, mental health services, and counseling to veterans who:

The Honoring Our PACT Act is a massive improvement in governmental action toward veterans who were exposed to toxic chemicals during service. In multiple military operations and various military bases across the world, service members have been exposed to toxic chemicals in burn pits, drinking water, airborne gasses, and by other hazardous means. The Honoring Our PACT Act will finally afford veterans the help they need and deserve.  Within the Honoring Our PACT Act is the Camp Lejeune Justice Act. This bill will allow people who used contaminated water at the North Carolina Marine Corps Base to file lawsuits to recover damages for toxic exposure. The bill states that people who were at Camp Lejeune between August 1, 1953, and December 31, 1987, for 30 days or more are eligible to file suit. Veterans, family members, non-military workers (civilian contractors), and others who were exposed between these dates may qualify for a lawsuit.

If you or a loved one were exposed to Camp Lejeune, call us at 617-338-7400 for a free case evaluation and to receive the next steps.